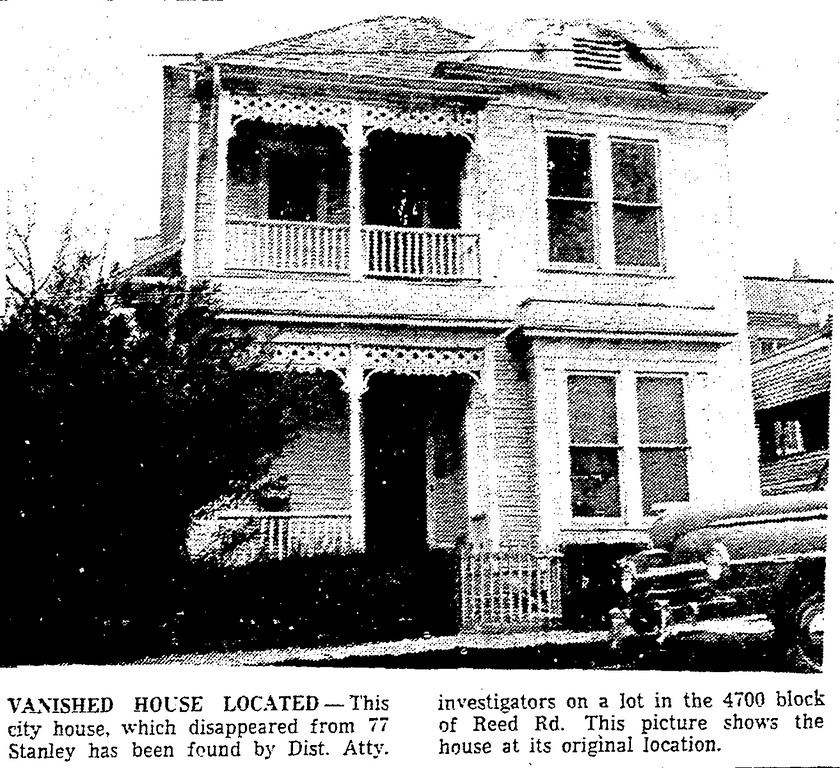 In honor of the 16th anniversary of the death of my father, here’s a story I wrote this morning about a stolen house. I’ve been researching this story for years and Rip seemed to be telling me last night that it was time to finish it. The best part of the story to me is the newspaper photo of the house Rip lived in when he was young.

The Stolen House
By James Smock

My grandparents Walter and Agnes Polka Smock were living at 77 Stanley Place when my Dad, Walter Alfred “Rip” Smock was born on August 8, 1923. Records from the city directories from 1890 – 1956 list the street name as Stanley Place but other records say Stanley Street or simply Stanley. Some later records indicate that the upstairs apartment was 77-1/2 Stanley but these variations were all the same place.
Walter and Agnes were renting the upstairs apartment of a two story home at the edge of downtown Houston, in the cities 1st ward, just south of Washington Ave and 1 block east of Houston Ave, very near what is now Houston’s main police station on Riesner St. which was built in 1952. They were less than 200′ from where Capitol Street and the Pierce Elevated portion of the Gulf Freeway (I45) crosses Buffalo Bayou.
Stanley Place was a short, dead end street that had only two cross streets. There were about 80 lots on the street and most of them had a house on it. The street was approximately the length of six city blocks, from Washington Avenue south to the banks of Buffalo Bayou. 77 Stanley Place was 5 lots from the end of the street, almost on the banks of Buffalo Bayou, right across the bayou from where the Sam Houston Coliseum was later built in 1937 and 7 blocks southeast of what is now Tilman Fertitta’s Downtown Aquarium Restaurant. St. Joseph’s Catholic Church, where Dad was baptized in 1923, was four blocks northwest of the apartment.

Dad’s mother actually had some history with 77 Stanley street long before she was married. In 1915, my grandmother Agnes Polka was 24 years old. She and her 22 year old sister Victoria left the farm and came to Houston. They had both been born on a cotton farm in Falls County, half way between Marlin and Bremond. They roomed together at 1111 McKee in the 5th ward, right on the edge of downtown Houston and quickly found jobs as seamstresses, Agnes at Miller Brothers and Vick at Cyrus W Scott Manufacturing.
Sometime in late 1916, Agnes and Vick moved to the upstairs apartment at 77 Stanley Place. In February of 1917, Vick married a young street car motorman named Edward Wick. Soon after, Agnes moved to Galveston to work as a waitress for the Harvey House restaurant at the train station.
Grandpa Smock mustered out of the United States Marines in Galveston, Texas on March 13, 1919 after serving his country during World War I. At the time, grandma Agnes Polka was still working as a waitress at the Harvey House restaurant in Galveston. Soon after arriving in Galveston, grandpa went to work as a cook, they met and were married that same year.

Walter and Agnes were married in Dallas on December 3, 1919, they rented a room in a boarding house and Walter opened a restaurant. Agnes’ father Albert Polka got sick at about the same time in 1919, he sold his farm and bought 12 acres in Marlin that was 1-1/4 miles from the Falls County courthouse on Fairgrounds Rd.

Walter and Agnes Smock moved to Marlin and Albert and Walter formed a partnership in late 1920 and opened the American Café in downtown Marlin. Marlin was booming at that time because of the hot mineral springs near downtown. Later that year, Walter and Agnes had their first child, a daughter named Doris Mae but the infant had health problems and only lived for a month.

In May of 1921, Albert Polka died in Marlin and the café was closed. Soon after that, Albert’s widow Anna, her younger children and Walter and Agnes all moved to Houston to be close to their kinfolks. Walter and Agnes rented a room at 1703 Everett Street and Walter went to work as a cook at Obrien’s Restaurant in downtown Houston.

Walter and Agnes moved into the upstairs apartment at 77 Stanley Place in April of 1922. Walter went to work as a cook at the brand new Tennison Hotel that had just opened at the corner of Washington and Bagby, a short six blocks from home. They lived in that house for several years after my dad Rip was born in 1923.

The house at 77 Stanley was built on a vacant lot by Herman Kazmieroski when he came to Houston in 1908. Herman and his wife Mary nee Bashinski were both from the Marlin/Bremond area and they were friends with Agnes’ parents Albert and Anna Maduzia Polka. The Kazmieroski’s rented out the upstairs apartment to several different people over the years as evidenced by classified ads in the Houston Chronicle that stated “For Rent – Upstairs apartment, all modern conveniences, walking distance from town. Apply 77 Stanley St.”
In the later months of 1953, the City of Houston properties in the area of the Gulf Frwy were expanded and the highway department was planning an extension to the freeway. A lot of homes and property in the area of Washington Ave near where the Pierce Elevated was to be built were condemned and bought under the state’s eminent domain law.

Herman had died in 1942 and his widow Mary remained in the house until early in 1954 along with their daughter Marjorie and Paul Robinson who was living in the upstairs apartment at 77 1/2 Stanley. In those early months of 1954, there were only 4 of the original 80 or so houses left on Stanley, all of them at the end of the street where the Pierce Elevated was later built over Buffalo Bayou.

Sometime in the early part of 1955, the house at 77 Stanley was put on blocks to be moved but the city was still negotiating a deal with Mary. Not long after that, city officials noticed that the house was missing and nobody seemed to know what happened to it. Seems to me it would be pretty hard to lose a two story house, even in a city as big as Houston but that’s what happened.

In June of 1955, the missing house was finally located in the 4700 block of Reed Rd, about 10 miles away. Investigators determined that it had originally been moved to the 2900 block of Lockwood, about 4 miles away and then sold and moved again to the Reed Rd site.

There was a big criminal investigation and the case went to a grand jury but I haven’t been able to find out who was responsible for stealing the house. I guess my research isn’t complete after all.