Although Dad never made a big deal out of it, I know he was disappointed that his oldest son didn’t go to work for Southwestern Bell Telephone Company. I know that he really wanted me to, but it just didn’t suit me. I might as well have worked for them though, since most of my childhood memories and many of my adult memories involve the phone company one way or the other. It really is kind of amazing how the phone company influenced my life.

I remember Dad being gone for weeks at a time after a major hurricane. Dad had a big family to support and he was always first in line when overtime opportunities came along. Since hurricane season coincided with the time for our summer vacation, it sometimes put Dad in a tough spot. As much as he liked the idea of the extra overtime, he liked his yearly vacation with his family even more. I remember one time, a day before we were to leave on vacation, Dad told everyone not to answer the telephone since there was a hurricane brewing out in the Gulf and he didn’t want to talk to his boss. He knew that once we were on the road, the phone company couldn’t find him.

Dad signed all his children up as members of the Southwestern Bell Telephone Company Credit Union so we all had an individual savings account. We would save up silver dollars we got from Uncle Marion and other small amounts of money and deposit them in our own savings account. It was pretty neat when we were little kids, since we each got a bank statement to show off. We also got freebees from the credit union such as the steel rocket banks that we each had.

From the time I was a little boy, I watched and helped my Dad build things from left over phone company equipment. Now, before anyone jumps to any conclusions, Dad was no thief. Southwestern Bell was always safety conscious and would replace items long before their useful life was over. In the days before everyone worried about lawsuits, it was pretty common to allow the employees to haul off these items before they were taken to the dump. And Dad always played by the rules; he knew what he could take and what he couldn’t.

The phone company reused some of the hardware from telephone poles, even though the poles were designated as unsafe and ready to be thrown away. When I was young, Dad would bring home the 8′ long cross arms with all of the cross arm braces, insulators and other hardware still on them. I worked hand and hand with Dad removing the hardware, some of which Dad would take back to the phone company for reuse. Later on, us older kids would work on removing hardware during the summertime, when Dad was at work. It wasn’t real hard work, but it was repetitive and sometimes boring when we would rather be playing games with the other kids. When I was a teenager with a pick up truck and Dad was working on the outskirts of Houston, he would sometimes call me up and have me meet him with my chainsaw to cut up and haul telephone poles from the side of the road. Sometimes we had to fight off the neighborhood farmers who also wanted those poles.

Dad used the big telephone poles for corner posts and the smaller cross arm poles as fence posts and braces for the corner posts. I remember helping him set those original poles in the back acre in Spring Branch, many of which are still standing strong after almost fifty years. And those were poles that were considered unsafe and no good by the phone company. He also used the cross arms to build sheds for storage and housing for the animals.

The metal braces that held the cross arms in place were one of Dad’s favorites. They were made of thick, strong galvanized steel and had a nice big hole on each end where the cross arm bolts had been, He always used them as garden row markers, tying string through the hole and stretching it between two braces so he could get a straight row. He also had a habit of bending the braces into different shapes to suit his needs at the time. I remember dipping out the septic tank using a coffee can with a curved cross arm brace bolted on as a handle. Not a fun job, but at least the cross arm brace handle kept you a few feet away from the sewer.

I was a grown man, probably in my early 30’s before I ever climbed on a ladder that didn’t have Southwestern Bell stamped somewhere on it. Dad would bring home the 30′ long, 3-section heavy wooden extension ladders and later on, the light weight fiberglass ladders. He either used them as is or took them apart for shorter ladders and other uses. When he took them apart, Dad always saved the bolts, ropes and pulleys for later use. I regularly used one of those older wooden extension ladders at my place in Hockley until the mid â€˜90’s and all of the deer stands I ever hunted from had those old phone company ladders leading up to them. I never once worried about those sturdy wooden ladders being unsafe.

One thing about my Dad is that he was a creative man. Since the phone company had very few stepladders to dispose of, he would take two sections from an extension ladder, cut them to the desired length and bolt them together to make a folding stepladder. He carried that idea one step further and made us a couple of custom folding fishing chairs for bay fishing. The chairs were made of two 8′ long sections of retired Bell ladders bolted together to form a folding x shape stand, similar to the step ladders he would build. The top of one of the ladders was a little shorter than the other and a piece of phone company canvas tarp was nailed on the top rungs to form a seat. It was a little tricky climbing into the seat, but once there, you had a nice comfortable seat several feet above the water.

Dad also used the two ladder x-shape design for other chores. We pulled the heavy galvanized metal pipes from the 180′ deep well in Waller several times using the ladders as a tower and the old trusty block and tackle as a pulling tool. 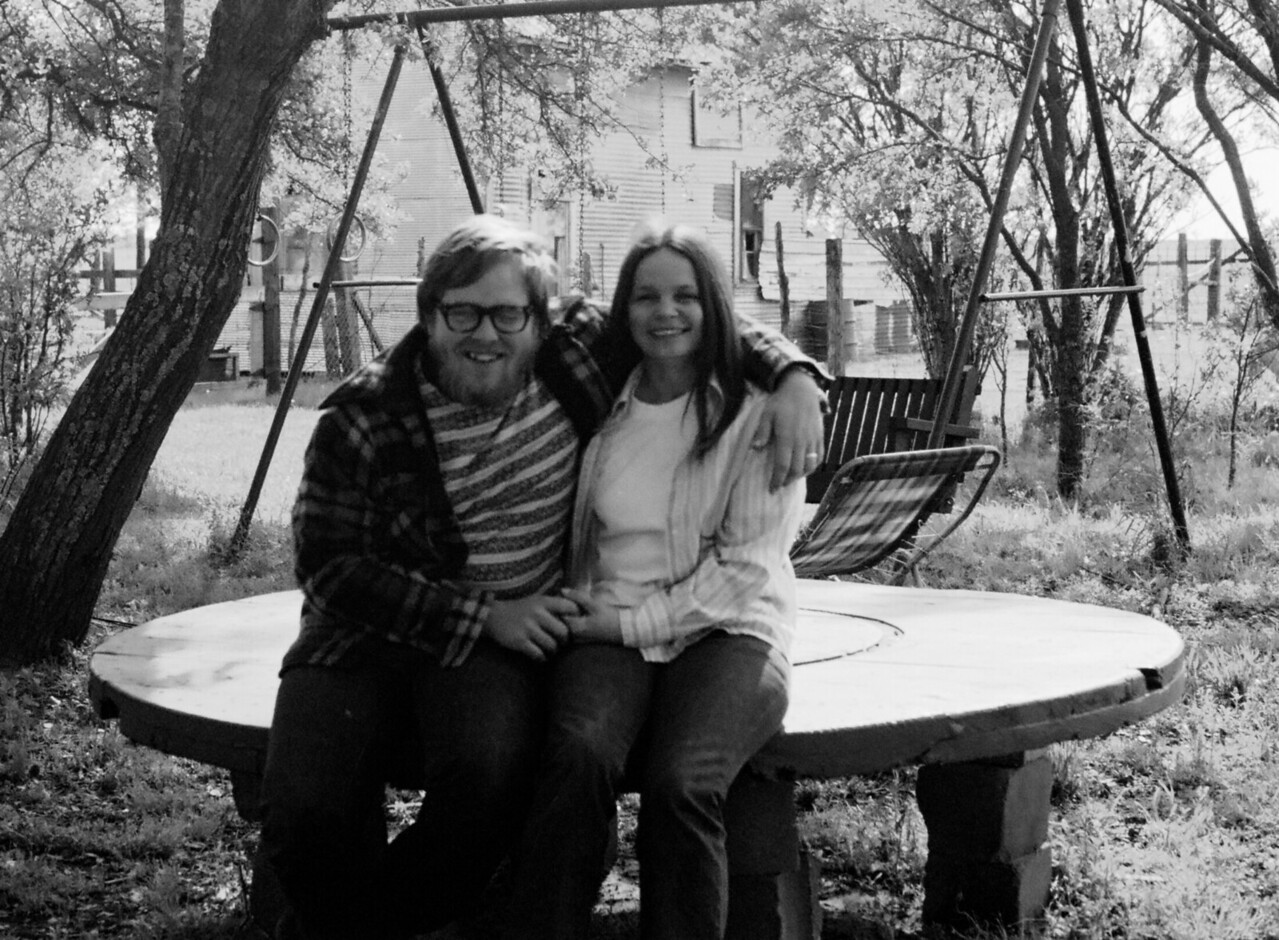 The phone company used a lot of pulleys and ropes for hoisting tools and melted lead up poles or down into manholes. Dad used the small pulleys from the ladders for lifting light weight things and to hang up smaller animals such as sheep or deer for skinning. The larger block and tackle pulleys were used for hanging heavy animals and for stretching fences. He used the canvas tool buckets for carrying fencing supplies and tools and he used pieces of the canvas tarps to cover all kinds of things.

When I was in high school and driving Uncle Marion’s old pick up truck, I hauled several of the large wooden wire spools. We laid them on their sides and used them as tables at the farm and at home in Spring Branch.

When we were getting ready for our annual vacation trek to the Frio river, we were always happy to see Dad bring home one or two large nitrogen tanks. The nitrogen was used by the phone company to check the cables for leaks, but the non-poisonous, non flammable gas really came in handy for filling up inner tubes, floats and rubber rafts. It sure was easier than spending hours with a hand pump. Since the nitrogen itself cost almost nothing, the phone company didn’t mind as long as Dad brought back the empty tanks.

Like most Bell lineman and installers, Dad would seldom be without his little pair of scissors. He used those scissors for everything, from cutting rope and dressing game to cutting electrical wire and fencing. Another handy tool was the lead splitter which was a curved chisel with the blade on one side and a flat spot on the other. It was used with a hammer to split open lead casings. Dad used that tool to split open metal buckets that he had planted trees in. Once the bucket was split, you could remove the tree with the roots and dirt intact.

I’m sure that I have forgotten a few things, but you can see how much Dad’s family was connected to the phone company. From time to time, I still stop and talk to some of Dad’s old phone company buddies when I see one of them working on the side of the road. There’s not many of them still working and it won’t be long before they are all retired and most of Dad’s old recycled phone company gear is gone. Soon, my connection to the phone company will just be a memory, and a pretty good memory at that.